It was the most exciting day for me!

the day of goodwill,

the day of loving confrontation,

the day of undying friendship;

And most importantly, it was the day of one everlasting love.

It was around this day last year and it started like any other normal day; neatly concealing the surprises it had in store in the later half.

I jumped off the bed, at the crack of dawn as soon as my eyes opened, mentally crossing out the items in the checklist that I had meticulously prepared over the course of previous two weeks. Upon crossing every item, my excitement increased little by little and finally when all the items were crossed out, I reached a point where I just couldn’t contain myself, so much that I just couldn’t stand still. It seemed like nothing could dampen my enthusiasm, not even Appa’s indifference nor Amma’s non stop grumble!

Smiling slyly, I sneaked out with my phone, “So you guys will be on time right?” I asked. It was more of a demand than a request, obviously. Yet, that did not matter, for my energy seemed pretty contagious even over phone. “Yes, yes don’t worry, we will be there, I promise”, he said from the other end not bothering to control his laughter.

Noticing me sneaking in and out every once in a while, Dad just couldn’t fathom what was wrong with me. When I noticed the quizzical expression on his face, I immediately put my head down, and walked away before he could summon me and demand to know everything. Few uneventful hours later, we left the house. Both Appa and Amma grumbling in the front seats, while me and Priya were giggling away to glory like the naughty teenagers we once were, leaving them angrier for the unwanted drama!

Appa drove on, visibly regretting missing out our neighbor’s wedding, “Thanks to Renu’s stupid plans”, I remember him growling at me! Whatever happens, may it be worth all the trouble that I had to suffer through, I silently prayed.

“What if they do not like the little surprise that we had arranged for them?” I appalled in horror at my sister for voicing out my fears, the fear which only became more and more pronounced as the most awaited moment drew closer.

Finally when we arrived, the visibly nervous me, led my parents in, expecting to receive an earful from Appa and Amma for making a big deal of a seemingly ordinary day in their ordinary lives. But for a change, Appa decided to be vulnerable. To say he was shocked, was an understatement. When everyone whooped and whistled at our grand entry, he just froze. First of all not he nor my mom expected anything but a simple family lunch out, and to see a whole crowd of people gathered to greet them and join in the celebrations was nothing short of breathtaking. And the gathered lot being their most loved ones made their display of vulnerability all the more worth it.

But honestly, I was the one who was most overwhelmed of all! My eyes welled up on seeing all my parents’ best friends not only turn up as promised but also enthusiastically partake in making their 30th anniversary a very special one. It was truly a sight to behold! A sight which I am sure I will never forget.

“What are you guys doing here” was all Appa could muster after it seemed like forever!

If a single phone call and a little bit of cajoling could get a crowd of people travel 200+ km and gather on the decided spot well ahead of the decided time for the sake of an aging couple, then that couple definitely have to be special! And to know that not one of the 8 families that the daughter invited, turned the invitation down despite the short notice and yet maintained the surprise element till the end, made the daughter feel special too!

It was just a few months before that day, I was privy to the well-guarded secret that my parents’ was a love marriage which was culminated after 3 long years of dating. It might not seem that big a deal now, but back it 1980s and in this part of the nation, it truly should have been! Although I am proud to have been born to one such bold couple, I was mad at them for hiding their feat from me and my sister for over 2 decades. I wanted to confront them with this new found information someday. And what better way to do it, than do it amidst those responsible for their union – my Dad’s childhood friends. I planned to embarrass my parents and seek revenge for keeping us in the dark for this many years, but instead it turned out to be one memorable day where they got another chance to relive their beautiful youthful days. They even allowed us to take a sneak peek into some of their beautiful memories, which we did so joyfully, all the while feigning irritation for not being allowed to be part of such open conversations earlier.

Nevertheless, it did not kill the fun of that day. The lunch lasted for nearly 5 hours and when we were politely asked to leave, we took our own time moving ever so slowly trying to prolong that day as much as we could. But when we were told(not so politely this time) we were obstructing the housekeeping staff from carrying out their tasks by not vacating, we had to grudgingly call it a day. We left the restaurant with our stomachs fuller and our hearts lighter, content on having had the best lunch in a very long time.

That day, I knew what friendship is made of. The lengths people go for the sake of making their friends happy and the unconditional love they shower on them and their offsprings is nothing short of mind blowing. Since then, they stopped referring to me as their friend Selvamani’s daughter, I am now better known as their new found bossy friend, who managed to get their otherwise sombre wives blush in public, while letting out one too many secrets :P.

Thank you dear Uncles and Aunties for making my Parents’ Anniversary a very special one and for giving me the privilege of becoming one of your youngest friends. The precious relationship that I share with each one of you- I will cherish for my entire lifetime. 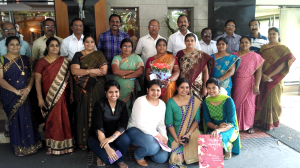 My job takes me places and I make the most of it! View all posts by Renuka S

Follow Renu's Zone – but not as complicated on WordPress.com
Join 48 other followers

So far so good…