I remember the first time I was able to do it!. Oh My God, that was so impulsive! I can’t believe that I had the guts to throw caution to the winds, and do what seemed insurmountable and impossible until that day.

It was Apr 26, 2014, 4:00 am when I got that call that completely changed my life for good! “Good morning, your cab is here” he said. Throwing off the sheets and rubbing the sleepiness off my eyes, I mumbled some excuses and 15 min later I hopped on to the car and rode on to experience what would be the first of the best days of my life.

In the wee hours of the morning, before the sun could sneak out of the clouds and the birds out of their nests,  I sneaked out of my house, rather remorsefully for missing an extra two hours of sleep, only to be welcomed by the cool sea breeze and the loud chatter from an enthusiastic lot all dressed in red Ts. And my sleepiness, well, on seeing them, it was replaced by briskness and a new found enthusiasm.

Just a day earlier, completely on a whim, I had registered for a 10km race at Dream Runners Half Marathon(DRHM) 2014, despite having absolutely no experience in running. Immediately after registration, I received a mail from the DRHM team asking me to come for the practice session the next day at 4: 55 am. What all trouble I have to go through for losing weight, I thought to myself and yet decided to go ahead with it(albeit grudgingly), having signed up already.

On day 1 of my training , I ran 5km and noticed that I was not lagging behind many and patted on my back for the task well done. Major credits though, goes to the adequate water support and the non stop cheer by the DRHM team. Then on, we met twice a week and I was slowly improving, gaining confidence and running faster. Yet, I was not prepared for what was later in store for me.

One fine Saturday morning, 3 weeks later, as usual, I landed in Bessant nagar, definitely not without fighting the inner demons who urged me to skip the training for some extra hours of blissful sleep. Like always, we did warm ups for 15 min, but when we were casually asked to run 10km, I was dumbstruck! 10km!? Of course I heard it right, I had no other choice, I was told! What! I should have just given in to those little inner demons and slept a little longer, I thought regretfully, to no avail.

My initial run, within a km became a slow run, which after 2kms became a jog and after 3kms became a walk. When frowned upon by a co runner, I complained about my painful knees which was dismissed off as a stupid excuse. He said “You can do it, just run with me”. He helped me until the 7th km after which I just couldn’t keep up with his pace and started walking. At which point, he tutted, visibly expressing disappointment and walked away(sorry ran away) in a huff.

My legs were killing me, yet I wanted to run, not because that uncle seemed disappointed but because I just wanted to get it over with ASAP. I tried harder and harder and ran without stopping; “Just one more km to go” somebody screamed. “Wow! 9km done! I have come so far, I can do it”; with enough self motivation in place and with the sun brilliantly rising at the backdrop giving the beautiful Bessant Nagar its characteristic glow, I finished my first 10km race.

Well, well, well, I was so overwhelmed with some inexplicable feeling I have never experienced before, that I almost forgot my agony and pains for a while. The only thought running in my head at that moment was “I can’t believe I just ran 10km, Wow”. It was like as though I cleared some tough exam with flying colors. Maybe this is what they call ‘Runner’s high’. The feeling that became even more pronounced when that uncle who ran with me complimented me with sincerity on my brilliant first attempt. All he did was just give a push, and I deserve all the credits for completing the run, he told me, while giving me a high five. That was enough to send my spirits sky rocketing.

What more, on that day I got to know what runners are made of. They are a whole world apart,having experienced multiple runner’s high in their lives! They know what pain is, they know what its like to move forward despite the pain, and the best part is they do not let something as temporary as pain stop them from shattering barriers in their minds.

And, it would come as no surprise that they are humble, disciplined, hard working, ever helpful and always motivating. Not just in running but also in everything that they do. And this is why I love them, look up to them, hero worship them and aspire to become like them someday!

Today, I am able to run 21km with ease. It was made possible mostly by the constant motivation and the continuous encouragement from these well experienced runners. Hope I soon become a full marathoner and do them proud for having contributed in making a couch potato a full fledged runner.

Cheers to running and to the runners!

P.S: Yesterday my energetic running group, Bessie Dreamers completed a year since its inception. Although I was not a part of them since day 1, I still joined in the celebrations at Besant Nagar. Looking back, I wonder in awe at our accumulated collective abilities. We have indeed come a long way as runners and fitness enthusiasts. This post is a tribute to the hard work and dedication of Bessie Dreamers.
Yo BD, rock on!!! 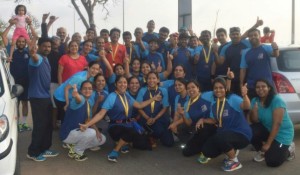 My job takes me places and I make the most of it! View all posts by Renuka S

Follow Renu's Zone – but not as complicated on WordPress.com
Join 51 other subscribers

So far so good…